Hi everyone and Merry Christmas!

Note: To keep these post short, I’ve made a Trello board with my goals for the year. Feel free to check it out if you want to know more about the bigger plan.

My word for the week is WRAPPING.

Not Christmas gifts, as these have been taken care of for a while and were quickly unwrapped yesterday. ^^

But the main idea was to wrap up as many goals as possible to really enjoy my vacation. The only exception was writing as I’m in doing a little writing camp this weekend as the girls are away, and also the Japanese lesson scripts as I can’t realistically do several in one day.

So I’m not completely done and I won’t take an actual break from my goals, which is why I’ll be wrapping up for the Round but not for the month. I guess I’ll just post my wrap-up for December along with my goal post this time. ^^;

I guess I’ll just wrap-up for December when I post my new goals next week. A bit unorthodox, I know, but why not?

My wrap up for the Round is rather positive, as you can see below. There are a few goals that aren’t clear yet, but they clearly fall into 2 categories: writing, which has been hard for a while now, and renovation at home, which is a collective goal and has been more impacted by exterior circumstances, so I accept that it will take more time and deadlines don’t really work in this case.

Now for my yearly wrap-up.

My Trello board for 2021 had 9 categories, so I’ll assess each separately.

Plotting went well and according to plan. Actual writing however became harder as the month went by. The main reason is that there’s always something more important to do and I’m too busy and tired to write daily right now. But I did find a solution with writing camps: Hubby agreed to give me more time on some weekends by looking after the girls on his own while I write. And of course, when the girls are away with family, I’ll also try to do this. Technically, I’m doing it right now!

That went really well. As usual, I realized I had been too ambitious and had to put some goals on hold, but since they were not realistic, I’m not counting them. The ones I did keep working on went all above 90%.

That went rather well too, with a score close to 100%.

I quickly decided to focus on meditation only and even did more than originally planned.

Getting into the Bachelor’s and reviewing went perfectly well.

This did not go as planned, but as I explained, it was mostly due to exterior factors so I won’t beat myself up about it and things flow.

I was aiming at one book a month and read twice that without an effort, so I’m glad. And it helps with the decluttering effort too!

I postponed one project and completed the others.

So in the end, not too bad, especially if I take a global look at my spreadsheet, which also includes last minute goals and some goals that aren’t in my Trello board because they don’t work in checklists. (This is a personal document, so I’m afraid English and French tend to coexist a lot ^^;, and I only started using it in May, so Round 1 and April are missing, but it does give a general idea.) 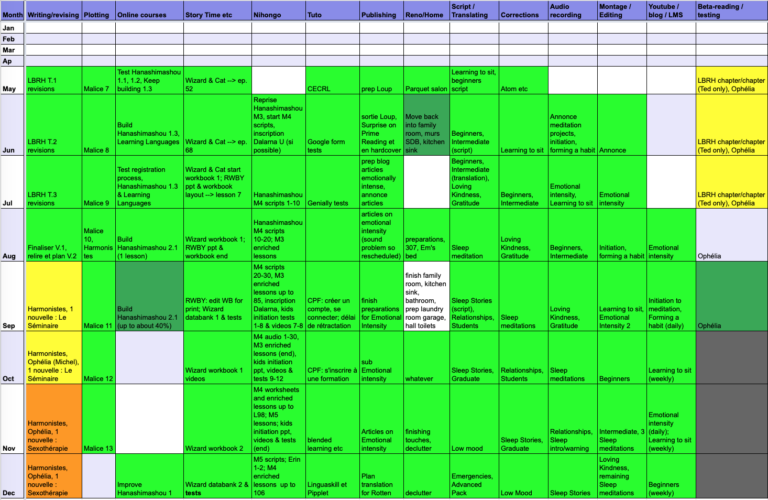 How about you? What is your word for this week and why? Let me know in the comments. Take care!